PUBG Mobile India Unban has got another news for all the players. From the time the PUBG unban news has come, most of the players are thinking about their ID’s. What will happen with their ID’s, as the different version of the game is coming, especially for Indian users. So, for all those who were worrying about their PUBG Mobile ID’s, do not worry as the in-app purchases and skins will be migrated to the Indian version from the Global Version.

There is one post posted on Instagram by Liquipediamemphiz, which says all the data of Indian users will be transferred to the Indian version from the Global version. Here is the post; check it out: 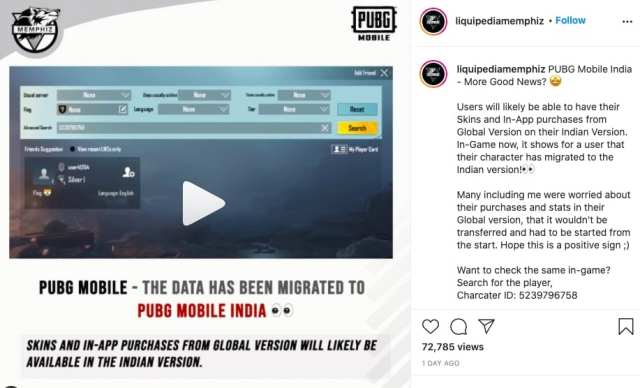 In the video posted on Instagram, you can see the ID of the user; when the player is clicking on the stats, we can see a message, “The player you are viewing has migrated to PUBG Mobile India.”

“Users will likely be able to have their Skins and In-App purchases from Global Version on their Indian Version. In-Game now, it shows for a user that their character has migrated to the Indian version. Many, including me, were worried about their purchases and stats in their Global version, that it wouldn’t be transferred and had to be started from the start. Hope this is a positive sign.”

Liquipediamemphiz also posted on a story that says the user in the video can get early access to the game, the rest of the players can play the game once it is available for everyone.

This is good news for all the PUBG Players, as all their data will be migrated to the Indian version game. Migrating the data means all your progress of the Game in the Global version will be restored on its own. And the Skins and other in-app purchases will be linked to your account once the data is migrated to your Indian version.

When is PUBG Mobile coming to India?

According to the leaks, the PUBG Mobile India might come in the first half of 2021. However, the official announcement might be done at the end of 2020.

As per the reports, the PUBG Mobile Indian version is different from the earlier version. There will be a few major changes, and this version will have a time limit for playtime.

Every day we are getting new news of PUBG Mobile India. Recently, we have seen, that the official website of PUBG India is back.